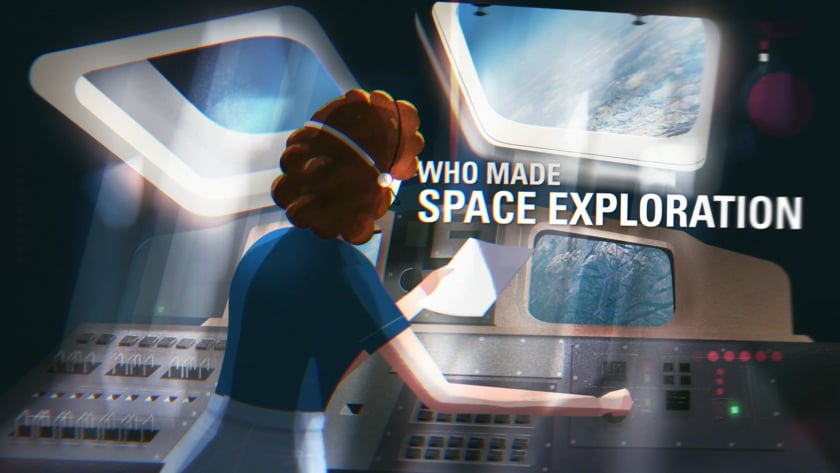 The final frontier. Something about space and space travel just sparks creativity. Maybe it’s the endlessness, maybe it’s the possibilities, or maybe it’s Captain Kirk’s dulcet tones inviting us to explore it.

Whatever it is that intrigues us we couldn’t have been excited to be invited to help the Queensland Museum to craft a series of videos for their NASA exhibit. But we didn’t want to just do the same old things… so it was time to figure out what are the underexplored elements of the story of space exploration.

Let’s Hear it for the Girls

“We were so excited to try some other things. I’m fascinated by the behind the scenes stuff. The people behind the people in the shuttles. As we researched more and more female names kept popping up all through NASA’s history and we got pumped about exploring that.”

But how do you make those elements exciting? It was time to get our hands dirty.

Explanimate artists Kelly Tan & Jenn Goddard locked themselves away and began trawling through reference images. Copywriters and animators were added and as the team began to grasp what could they settled on an approach that would focus on the situations and the characters and that animation would take a backseat to design.

We wanted to draw attention to real people while not naming them explicitly. It allowed them to be cyphers for the audience to see themselves through, as aspirational and iconic. So we made sure to give as many clues as possible to the identity of the people and allow a keen observer to identify them and interested viewers to discover them for themselves.

Queensland Museum hit the social media channels hard with these. We got so many shares and mentions from fans who knew we’d worked on them that we could barely keep up. But more importantly it helped make the exhibit one of the most visible and well attended in their history.