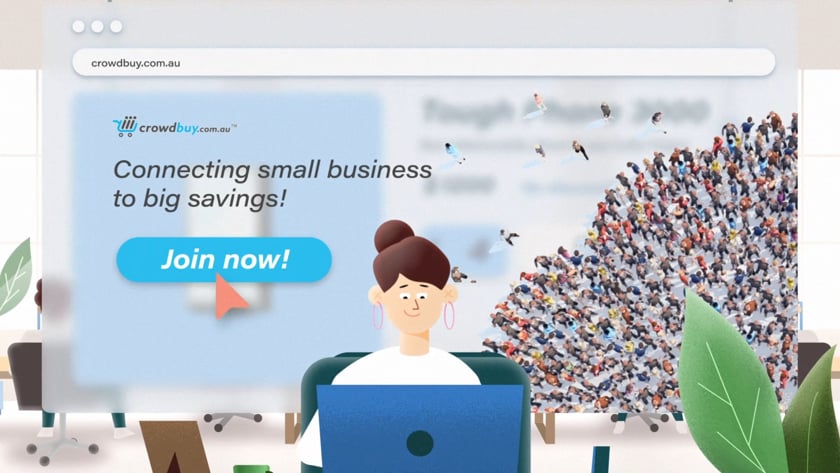 Nobody likes getting ripped off. So how do you avoid it?

Well, the team at Crowdbuy has a solution for you and your business.

As the great Darryl Kerrigan once said “if you get them for half price, it’s a bargain”. We can’t argue with an icon like that and neither can the team at CrowdBuy. They created a system to give buying power back to the customer. Allowing a group (or ‘crowd’) of interested buyers to buy in bulk, saving them money, and clearing out inventory for businesses, “looks like everyone kicked a goal”.

“She works hard for the money”

When we first met with the CrowdBuy team they couldn’t have been more excited to tell us their idea. Once we’d heard it we got why they were jumping around like a kid in line for the toilet, it was a pretty great idea and one that we could instantly start to visualise which is always a good sign. We floated some initial ideas by them and they were keen so we sharpened our pencils and got to work.

It’s no surprise that a crowd requires lots of people… it’s kind of the definition. But people = time/money in animation and every client has a budget. We wanted to make sure that we weren’t wasting the client’s money building an endless sea of people for a shot that might only last a couple of seconds. So how to get around it? What could we do to create a sense of scope and appeal to the widest audience but stay on budget and keep it interesting?

Our animator Nick knew right away what we needed to do, “I wanted to put the customer literally front and centre, so I created this idea of match cutting between a host of customers in their respective work environments. We would be able to, in a very short amount of time, get a taste for the scope of the audience’s world.”

Not only was it a great problem solve but it gave us a visual language with which to approach the rest of the video. We took it to the client and they loved it, so we were onto the next step.

Great ideas are rarely without their challenges and this one, in particular, required us to get the world “right”. If people were going to be expected to see themselves then the worlds we created needed to be identifiable. We spent time on the details, making sure we selected just the right tool and the right person to represent each area. After some back and forth with the client, some revisions, and adjustments we got there.

“Just to hear them say that they care”

To be honest, when they first approached us with what they had in mind and the budget they had to execute it, we’d have told them they were “dreaming”. But as we worked together the end product most definitely captured “the vibe”.