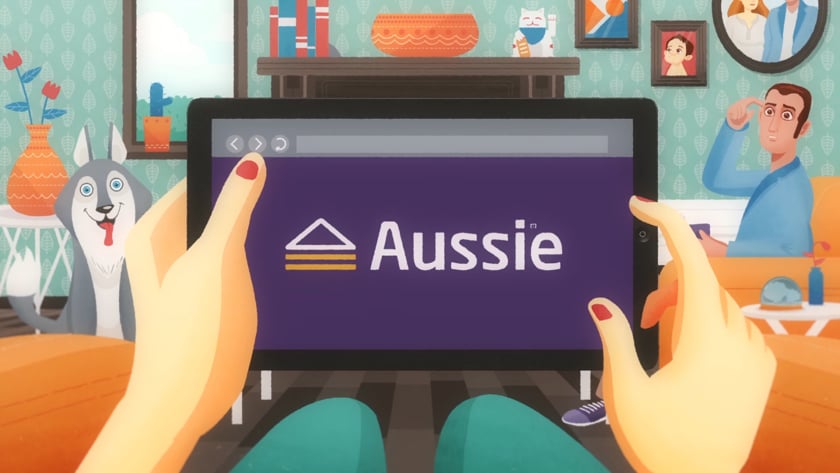 After creating a commercial animation for Aussie back in 2015, we worked with the team again on a refreshed take of the animation.

We didn’t want to just rehash the old one and update the info but rather give it a new life. We focused on hand-drawn elements and keyframe animation. As a result, the detail of this latest animation brings new life to Aussie’s service offering.

Having worked with the team at Aussie Home Loans before we settled into a groove very quickly. They were thrilled as we discussed the potential for this new video. All the things it could be and how we could bring it to life.

They were as excited as we were by the potential and the ideas weren’t just coming from our side of the table.

They really wanted to put the viewer in the driver’s seat. To really take them through the journey of applying for a home loan. DING DING DING!!! Why not actually put them in the driver’s seat and create a video that was told entirely from the point of view of the customer.

They loved it and so we were off.

The first thing we needed to do was to find a design style that would feel comforting and homey. So many financial product videos are bright and colourful but it all feels a little too polished, a little too corporate. We wanted something that felt a little rough around the edges, hand made even. Something that spoke to the hands-on experience that Aussie deliver.

So our animators put the keyboards and mice to the side for a couple of days and got back to their art school roots – pencils and paper. They sketched and erased and sketched again. Soon they found a look and a feel that allowed them to tell the story in a way that felt unique. And one that also spoke to the audience Aussie were trying to connect with.

After a little bit of back and forth, we were able to land on a look and a feel that their team and ours felt worked. Both visually and functionally it allowed for plenty of invention and the animation began. We employed several elements of 3D and 2.5D to assist with the transitions and to help the video come alive.

The final result is an eye-catching and engaging video that has helped countless people find their way to Aussie Home Loans and embark on a journey of homeownership.