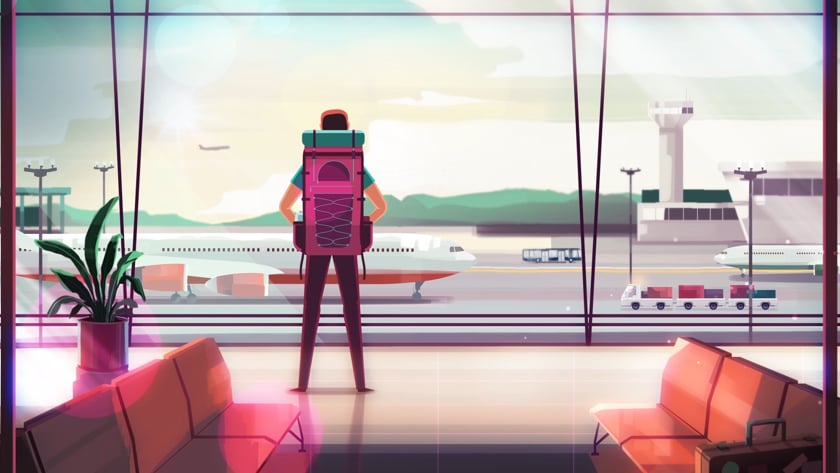 Sometimes we do work that never sees the light of day for one reason or another. This job is one of those.

The client wanted to “tell their story”. They wanted something that humanised them and chronicled where they’d come from and where they were going.

And there’s no better visual for the idea of travel and a journey, than an airport.

Always pushing up the hill

“We all love airports… well, not the food prices but the other stuff. They’re exciting, they represent the joy of possibility and the comfort of returning home,” said Explanimate Producer Dave Owen. “If we could capture that sense of adventure we knew we’d be onto something.”

So we discussed it with the client, it was clear what sequences needed to be shown. How was the best way to join those scenes together and to give them a sense of cohesion? We wanted the animation to be seamless and to imply their ‘story’ had been similarly seamless.

How can I explain

It wasn’t enough to simply imagine what some of these scenes would look like or how they would function. We dived into research. Sent plenty of emails and had phone calls back and forth with the client so that we represented everything as accurately as possible.

We made sure that we’d get a great looking end product. We wanted something that their peers and interested parties could see their day to day work-lives in. That sense of representation was a powerful outcome.

Once we had the nitty-gritty down then it was time to make it beautiful. “Despite the flack JJ Abrams (Director – Star Trek, Star Wars VII, Mission: Impossible 3) takes for them, lens flares are awesome,” said Dave. “When used correctly they can help bring warmth and energy to a scene.”

We rigged the ‘camera’ to map its movements so that it felt like a real camera and its movements felt purposeful and elegant. This allowed us to play with the viewer’s expectations and ensure that they had to sit forward and engage with the video and not just let it wash over them.

We are always running for the thrill of it

Unfortunately, due to some restructuring and administrative changes in the client’s organisation, we weren’t able to publish this under the brand for which it was created. Nonetheless, the client loved it and it’s one of our most frequently referenced videos on new requests. So here it is where it can see the light of day (even if only in secret ;))