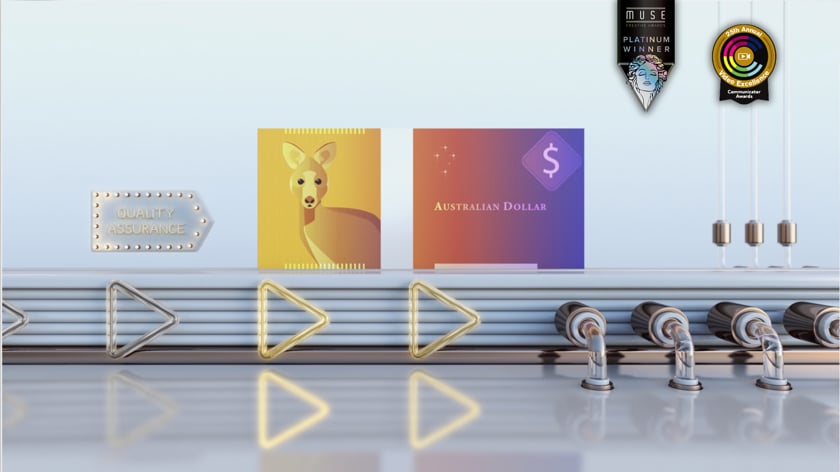 Money might be the root of all evil but it sure looks pretty.

When the Reserve Bank of Australia contacted us to create an animation that would detail the lifecycle of a banknote we were barely off the phone before the ideas came thick and fast like coins from a slot machine.

They wanted something that was both educational but also fun and while they weren’t 100% certain a conceptual approach would work, bless them, they gave it a go… and they were glad they did.

Ideas are great but as the saying goes they’re “like armpits – everyone has them”. We didn’t need an idea, we needed a great idea. One that would take us on this journey in a way that felt new and exciting and wasn’t just machines and conveyer belts.

It needed to cover three things: the creation and testing of the note, it’s use in the real world and what happens when it was no longer needed. In the creation and design step there were certain steps we needed to follow and that helped give us a framework to operate within.

Once we had that locked down we started to think about how it was used in the world and our relationship to it. What was it to us and to the average person? We live in an increasingly cashless society so how could we tap into what makes cash special?

We thought about the first time you opened a birthday card from your nan and MONEY FELL OUT! Was it a mistake? Only adults have notes right? But nobody was saying anything… You look at nan… she looks back… it’s yours! Jackpot! Now a new question arises… what do you do with it? A world is opened to you.

One of the fun parts about a project that stretches us is connecting with talented people we don’t always get to work with. On this project we enlisted the help of long time Explanimate partner Brad Coomber to work with resident 3D specialist Adam Kelly to design and create some of the showcase elements of the video.

Working with lighting, liquids and the physics of plastic notes provided plenty of challenges and testing.

As we worked with the client on meeting the expectations of both their internal staff and the external consumers of their videos we were able to create something that was truly effective and artistic all at the same time.

The video gathered more views in it’s first 24 hours than any other video in the Reserve Bank’s YouTube history and more importantly, they were thrilled with the final result.