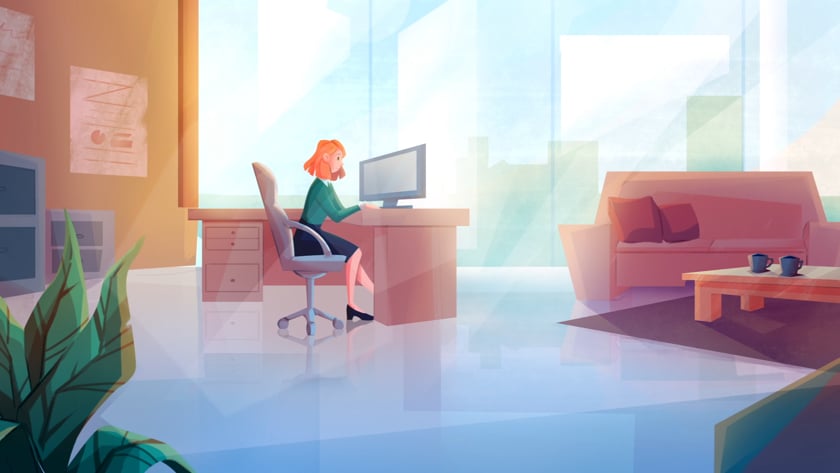 Veolia takes its processes seriously. You have to when you operate in as many countries and fields as they do.

They knew the concept they were trying to explain – asset management – was difficult. It often required long meetings to explain so they were sceptical but hopeful, that we’d be able to convey it in such a short time.

“It’s really about how and why things break and how best to stay on top of that,” said Zach Phillips, Veolia’s Head of Asset Management in Aus & NZ.

“Oops I did it again”

Asset Management can feel pretty impersonal, with a lot of charts, computer processes, and tracking on spreadsheets. So rather than go entirely impersonal we brought in a human character to take us on the journey. Starting the video in an office allowed for a moment of personal connection with the audience, so when we then dive into a more conceptual world, they feel grounded and aware of where they are.

“That is just so typically me”

We really wanted the design to do the heavy lifting, we wanted the “real world” to feel so expansive and full of light and work that when it flipped and went into the conceptual world that would feel like a shift. As though our main character was getting down into the nuts and bolts of the operation. Adding light and large glass windows into the office gave it that sense of grandeur and space that we were chasing and worked as a wonderful counterpoint to the constricted blue world she would enter.

“Got lost in the game”

Once we had the design and the concept we thought it would be smooth sailing… oh boy were we wrong. It turns out Veolia was right (who’d have guessed) and that Asset Management is an incredibly complicated story to distill down. There were a number of revisions as we tried to zero in on what it was that would crack it and eventually we got there. We were able to cover all the content they wanted, with visuals that worked for and spoke to their audience.

“I’m sent from above”

They were thrilled with the results and it’s now used the world over, has been translated into multiple languages, and helps Veolia staff better understand their processes.