Stay safe on our roads 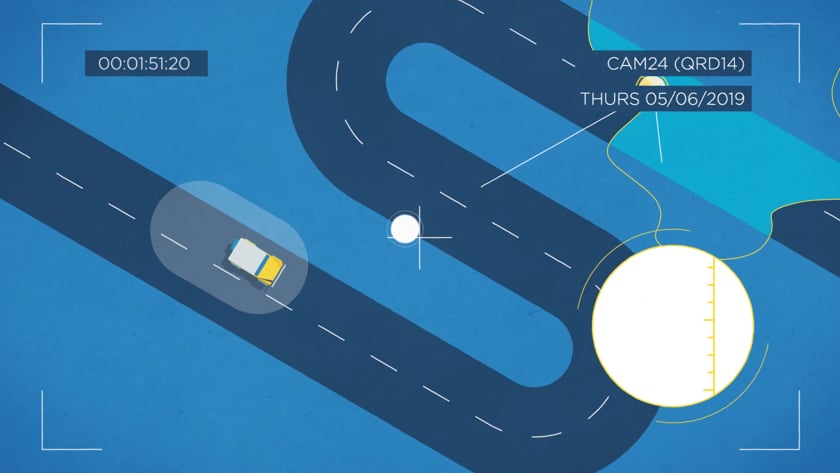 Here at Explanimate! we love stories. Whether they’re movies, books, comics, plays, you name it, we love it. And so as a result the first place our minds go when a new video shows up on our doorstep is to see it through that lens. To try and find the “hero’s journey” of it all. While sometimes that is absolutely the best way in, sometimes it really helps to shut that part of the brain down and approach it from a completely different angle. Prospect Environmental afforded us just such an opportunity.

“Into this world, we’re thrown”

Prospect Environmental are helping keep our roads safe with their new technologies. They were looking to launch a completely new service – SMiG. They needed a visual style that suited the elegance and complexity of their tech. It’s not really a personal story it’s about the technology and the benefits it can have. So we could have told it from the perspective of a family out on a trip who runs into danger and SMiG gets them out but we all agreed that the focus of the story needed to be the technology.

So we dropped the characters altogether. We approached it through the same dispassionate lens through which it was developed – focused on facts, figures, and real-world outcomes. We wanted to bring that dispassionate approach to life so that it could be easily understood and digested by the very people it would affect.

Creating a unique blend of iconography, flowing transitions and engaging visuals was no easy task. It required all hands on deck, to suggest, consider and then dismiss or embrace the visuals. We wanted to capture the way the technology is so high tech but dealing with such unpredictable and organic data (the weather). The style needed to find a bridge between these two worlds.

The flowing movement and soft lines of the roads were juxtaposed with the dense but ordered tech aspects of the frame, overlapping iconography, and different details that are often only consciously picked up on with multiple viewings.

“An actor out on loan”

Once we were certain we had found that balance it was time to execute it. The design was a vital component but motion was going to be essential in discovering if our vision for the project had worked or if we’d gotten ourselves bogged.

Thankfully, those early planning stages had paid off. Once it was up on its feet and we could see the way the elements interacted, the way the transitions helped smooth the connection between different ideas we could all breathe deeper.

“Riders on the storm”

Not all stories need heroes and villains. Sometimes it just needs a person. Doing their best despite what’s in front of them.