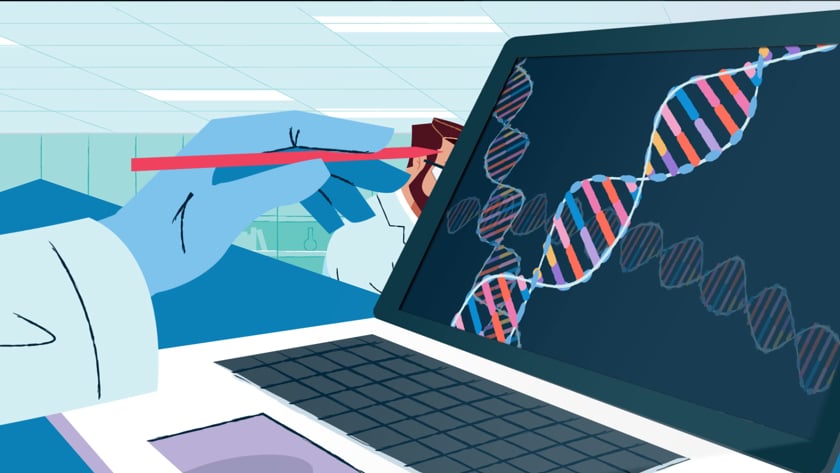 We imagine environmental ecosystems run with the same political and social structures as human society. There’s probably a whole other Star Wars franchise just waiting to be made from the political landscape of… well the landscape.

We think it would be a great success. We’ll call it Eco Wars and the role of Anakin Skywalker will be played by an ant. Antakin Skywalker.

But whilst Eco Wars would be an amazing franchise, we can’t quite wrap our heads around the political climate of the non-human world.

In order for us humans to better understand these ecosystems, scientists use environmental DNA, or eDNA. We didn’t know much about this eDNA as we pondered the political hierarchy of non-human life. So thank goodness Illumina approached us asking for help to make a video which would educate audiences on the benefits of eDNA research to aid the environment.

We would have to show audiences how scientists in labs can affect the creatures in ecosystems around the world.

To show the relationship between science and ecosystems, we simply removed the barriers between the two. Opening with visuals of scientists in the lab, the camera then panned directly into a stunning outdoor environment. By doing this without showing walls between the two settings, we effectively places the scientists both in the lab and out in the environment at the same time.

We furthered these ties between science and ecosystems by using the same colours in the ceiling and background in the lab as in the sky of the environment.

But we needed to do more than just showing science’s relationship with the environment, we needed to show how eDNA, specifically, could benefit ecosystems. Which meant explaining what exactly this research is.

Just kidding! As the purpose of this video was not to explain the intricacies of eDNA research, it was important we kept the jargon to a minimum. So, by providing a basic summary of what eDNA is and how it can be used, we avoided confusing viewers with unnecessary scientific details.

All in all, Illumina loved how this video captured the capabilities of eDNA research for understanding and aiding ecosystems around the globe.

We liked how eDNA would finally allow us to understand the social and political systems in the environment. Eco Wars. Antakin Skywalker. It’s going to be a thing.