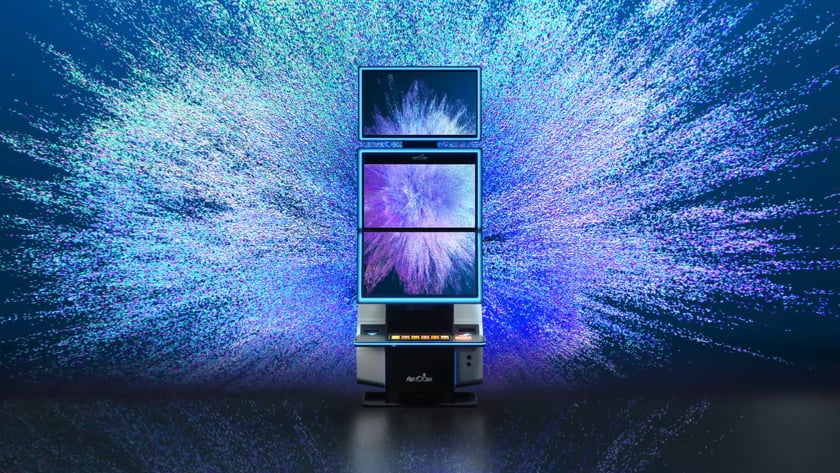 Aristocrat make world-renowned gambling machines. So the launch of a new one is a big deal. They wanted it to be special. To be sleek. To be spectacular.

We don’t know a lot about gambling… there used to be an office flutter at Melbourne Cup time… but the less said about National Horse Execution Day the better and so when Aristocrat approached us about making them a video that showcased their brand new digital slot machine we, like 4 out of 5 drunk guys and fights, were up for it.

“You’ve got to know when to hold ’em”

We were pretty upfront about our lack of specific experience with the products they made but also that we were, as always, up for a challenge. They loved that we were able to bring a novices’ eye to the project. That allowed us to see elements and aspects of the new machine that may not have seemed that exciting to a more cynical eye. We spent time going over the plans they sent us, the specs and design docs.

Luckily, what we lacked in experience with gambling we more than made up for in 3D modelling and animation. The sleek, polished, pretty light aesthetic of the machine really leant itself to a kind of sexed up approach. Black backgrounds, moving camera, close ups and showing the machine slowly spinning. We wanted it to look incredible. Too often pokie machines are seen as cheap and nasty and in brightly lit RSLs. We wanted it to feel futuristic. So we cracked our knuckles and began modelling the machine in the 3D.

“Know when to walk away”

The first renders that came out looked like we’d hit 3 cherries in a row, they were freaking gorgeous! We couldn’t have been happier. Showing them to the client was (as always) a little nerve wracking), sometimes you’re convinced you’ve nailed it only to be shot down, sometimes you’re sure they suck but the client is in love. Luckily, this time around we were all on the same page. Once the stills were approved we dived in and began work on the wireframe.

“And know when to run”

A wireframe turned into a finished render and the job was done. Bursting with colour and attitude the client was knocked out. The launch was incredibly successful and we added another video to our portfolio that we’re not only proud of but thrilled to watch over and over again.